I’ve been incarcerated for 22 years. I started taking a weekly nonviolent communications class just (NVC) six weeks ago and found out how useful it was just recently, when I came before the Parole Board.

They asked me to give them an example of how I’ve changed, how I deal now with conflict. I told them that, just last week, I was confronted with a situation that would illustrate my new attitude.

A guy I didn’t know well approached me aggressively and made some assumptions about what he thought was true. Rather than getting defensive and triggered, as I would have done in the past, I instead thought ‘Hmm, I wonder what’s going on with him; what’s behind that anger?’ He was surprised at my approach and that I listened to him rather than get back in his face. I used NVC techniques to get more information, guess what his needs might be and then to help him understand my part in the situation. His attitude changed as a result of the tactic I used.

Having told the Parole Board this story, they quickly determined that I was suitable for release, and they’ve set the date for eight months from now. I’m very thankful to the NVC class for having given me the skills I need to handle conflict differently…to see what’s behind other people’s anger before reacting to it.

Having spent a collective thirty-plus years in prison I’ve grown accustomed to the hatred, violence, racism, anger, negativity, and ruthlessness that prison has to offer.

Myself, having afflicted permanent brain damage onto one man, taking the lives of two other men, and a brutal penitentiary stabbing onto yet another, I am no stranger to a world filled with anger and violence.

Over the past twenty years I have involved myself in numerous programs with one goal in mind: to make myself a better person so that I will never harm another human being as long as I live.

I heard about a new program called Nonviolent Communication. I decided to look into it thinking that maybe I could find a golden nugget.

The first thing I learned was an entirely new concept for me. It was a thing called, “empathy”. This was difficult for me to grasp because for the most of my life I had no concern for other people nor how they felt.

As the months passed bonds were formed and strengthened between all of the members in our NVC group. We began to accept and trust each other after only a few short months. Today we view each other as, “family.”

I found myself comparing what I had been learning in my NVC group to that of the numerous other programs that I had taken over the years. One thing is for certain, never before have I seen the changes and the progress that I’ve seen in each member of my NVC group.

My NVC group is a beautiful mixture of ethnicity, religion, personality, cultural background, and sexual preference.

We have all lived by the codes, creeds, and unwritten rules of prison for many, many years. What I’ve seen and experienced in NVC I’ve never seen nor experienced anywhere else – and for that I am eternally grateful.

In my NVC group we have all transcended ourselves above the elements of our own environment. We’ve crossed ethnic and racial boundaries, as well as having risen above the prison’s political convictions.

We are able to look at each other and say, “I like you, I trust you, I respect you”, and, “I am proud to be your friend.”

All my life I have never been able to forgive myself for letting my father kill my younger brother when I was eight years old. And because I did not have any better example I became my father. When I joined NVC I was jaded and cynical, as time went on I learned that I could be a different person. So now when I feel tempted to use my old ways I stop and give myself empathy and my family has stated on may occasions that they can see a difference in me. I am grateful that they recognize the changes I have made.

I have learned a lot of things in prison; mostly I have learned how to be a better criminal. If I wanted to when I get out of here I could set up an effective crime organization, but after taking this class I don’t want to. I want peace for me and my family and now I know how to get there. Things changed for me when you talked about shame in NVC I, and I began to realize how much shame has been running my life. Now I don’t do what I used to do when I felt shame, I can make different choices, and it has made all the difference to me. 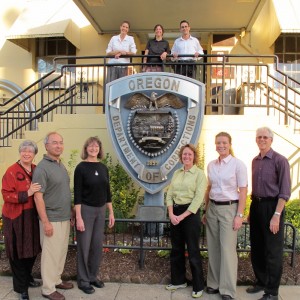 We have more than 30 volunteers providing weekly NVC classes in five Oregon prisons and one post-release program. Learn more about what we teach or how to support our mission.

If you are lucky in this life
A window will appear on a battlefield between two armies
And when the soldiers look into the window
They don't see their enemies
They see themselves as children
And they stop fighting
And go home and go to sleep
When they wake up, the land is well again.